Like many a geeky youth, I managed to get through school without much of a focus on health or fitness. I played Rec league sports as a young child and I even twice tried out for varsity volleyball in high school (and was twice cut; it was pretty competitive in Virginia Beach). I never was much of a sportsman and, on the whole, I overall got about as much physical activity as PE requirements and later living on the fifth floor of my college dorm dictated. Upon graduating, having lived with this general disregard, MIT stress, and an enthusiasm for craft beer, I wasn’t in great shape.

I think I believed that the physical wasn’t important, that it was a distraction from intellectual pursuits. As I come into my mid twenties, I have adjusted my thinking: for better or worse, my brain is part of my body; it is fundamentally fool to suggest that I can expect the former to work well without taking care of the latter. 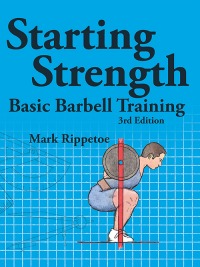 Following my initial 2 year uphill battle from college graduation (described below) I’ve gotten myself to a pretty steady weight dancing around 165lbs in the 15-17% body fat range. I am looking better and feeling better, but there is a long road of maintenance and optimization ahead. I try to view that fact positively :-).

##Strength Following largely on the enthusiasms of my roommate, I have been following a general novice powerlifting routine, with heavy reliance on her advice and the bible (pictured at right).

At current writing, Personal Records for the main exercises are as follows:

Unless I get this to update dynamically, those are likely (hopefully) out of date. If you are really curious, check out my Fitocracy profile for recent workouts.

##Nutrition I was always, and probably still am, a picky eater. I despised non-water beverages and sauces of all kinds. Despite my parents’ best efforts, I ate absurdest numbers of hamburgers and fries (I originally also hated cheese, so even cheeseburgers were out). I’ve come a long way, but I still have a long way to go. I remain kind of irrationally afraid of cooking. I use Quest Bars as a crutch—a delicious, delicious crutch.

I played good-boy on a IIFYM basis for the first 2 months of my experience with ETA, but now I am probably not even hitting my daily protein goals. A while back I bought the Precision Nutrition system. I have big hopes for it when I finally make myself read through it and get started. But if you come to be reading this and have suggestions, feel free to send them my way.

##Cardio At some point, I ran regularly. That point was not super recent, and its a shame. Running is pretty awesome. (I especially have fond feelings about doing the Harvard-Longfellow bridge loop along the Charles in Boston/Cambridge). Anyway, let’s hope this is out of date and I’ve been running some. You can find out on RunKeeper

I also have a Fitbit. There should exist proof I am at least walking some here.

Also I love Dance Dance Revolution. I have 3 pads in my room, but the best one is broken and my Stepmania setup isn’t in good shape :(. But if someone ever wants to go hit up the DDR machine in the basement of the Times Square Toys R Us, for example, I AM SO DOWN!! ^_^.

#The Path from College

As I said above, coming out of college things were a little bleak. Jumping into full-time work, despite picking my first apartment building partially for its nice gym, I found myself gaining weight and feeling like crap. Slightly before I left TripAdvisor, when I weighed myself at 210lbs (and about 22% body fat), I finally said enough is enough and got a personal trainer, which along with regular use of Lose It! saw a decent amount of weight loss.

When I moved to New York and started at charity: water, things fell off again. I did okay initially: I got through about the first month of ETA (below) in about my second month of work there and managed to survive a Tough Mudder with my coworkers–gaining for my trouble the sweet picture that graces the homepage of this site— but after that it was back to fat city feeling shitty. When I left charity: water the following January, it was time to get serious: 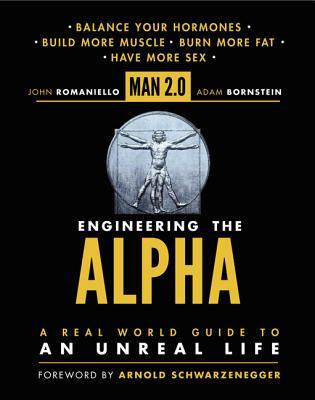 At some point, I had signed up for Fitocracy. Combining the hope of getting healthier with social networking and RPG elements, what wasn’t to love?! Some time after that, the operators of Fitocracy let John Romaniello, a contributer to their blog, announce his new book (co-written with Adam Bornstein) to their mailing list.

Despite the (still) rather appalling title of Man 2.0 Engineering the Alpha: A Real World Guide to an Unreal Life: Build More Muscle. Burn More Fat. Have More Sex, I checked out the Amazon reviews, looked at the ~$20 price tag, and bookmarked it as a maybe later. Some time later I figured “what the heck?” and ordered it. I think it was a good decision!

Roman (as the primary author is often called) is an interesting, smart dude and the book reflects that. Even after reading the Amazon reviews, I did not expect the delving into Joseph Campbell’s Monomyth/ “Hero’s Journey” and its potential for application as a framework for personal growth. That idea, paired with the notion that a physical transformation is a powerful springboard for further self-improvement, makes up the bulk of the book’s front third. I think those ideas are pretty powerful, and while in hindsight they seem maybe obvious, I am sincerely grateful to have read them cause I don’t think they were obvious to me then. The second third is a quick and dirty rundown of modern nutrition, training methodologies, cursory endocrinology, etc. with a focus on dispelling some well-established but purely-substantiated popular wisdom. This content is the “Intro to Bro Science” I referred to in my appearance on Episode 19 of this MIT college radio program. As I said there, it’s pretty good, not great. As someone who was a real novice, I think it was useful, but it probably could be scoped better in multiple ways. I also really wish it didn’t lack real citations (Roman told me they were eventually forthcoming on Twitter once, but both authors are busy people and I kinda doubt it at this point).

But for all the value of philosophy, motivation, and knowledge-dumps, a fitness book is probably ultimately to be judged by the workout and nutrition plan it recommends and the results thereby created. Engineering the Alpha has a 16 week, 4 phase plan with each phase focused ostensibly on optimization of a particular hormone (insulin, testosterone, GH) in a general framework for fat loss and strength/muscle gain, as well as general mood/psychological improvement. It is this aspect that drew me to the book. I remain unclear on my fitness goals, but I am pretty sure they amount to “feel good, live well” and in this I think targeting hormones makes sense, if it is truly possible.

I followed the book’s plan pretty rigorously for the first 2 months, but I let the nutrition slip a lot in the last 2 months. My results were decent (179lbs, 20.6% Body Fat, Jan 2014 -> 164.6, 16.6% BF sometime in March) but not as great as I had come to hope for in my reading. Maybe if I’d followed everything to a T they would have been, but I have grown somewhat skeptical. Overall, picking up this book (especially the second time, in January 2014, after failing at its plan the previous October) was a pretty good thing that I did for myself (and that the authors enabled).

The book’s primary title, “Engineering the Alpha” follows from a perhaps overly idealistic desire on the part of the authors (as they discuss in the first section) to reclaim the term “alpha” from the pick-up artist community and its echoes in the fitness world. More than that, they seek to remove the general connotation of comparativeness from the word “alpha” (despite its origins in social hierarchy in ethology), and allow it to connote instead an idea of self-actualization. In short, I think the word John Romaniello on some level really wanted to use was always “Apotheosis” but he (and his co-author, editors, etc.) knew Alpha would sell better. By this bar, the book fell short for me. I think it improved my life non-trivially and I am glad to have pursued it, but I do not feel complete or idealized, physically or emotionally. On the whole, it was unrealistic to ever let my hopes get that high. But I am not dead; I have much more time to achieve, and I think the book did serve me well in laying a solid foundation.

If nothing else, I do believe that the book was instrumental in facilitating the engineering the “alpha” fitness-conscious Donald Guy, in at least the software engineering sense of the word.

You can find more about my further and ongoing efforts above.